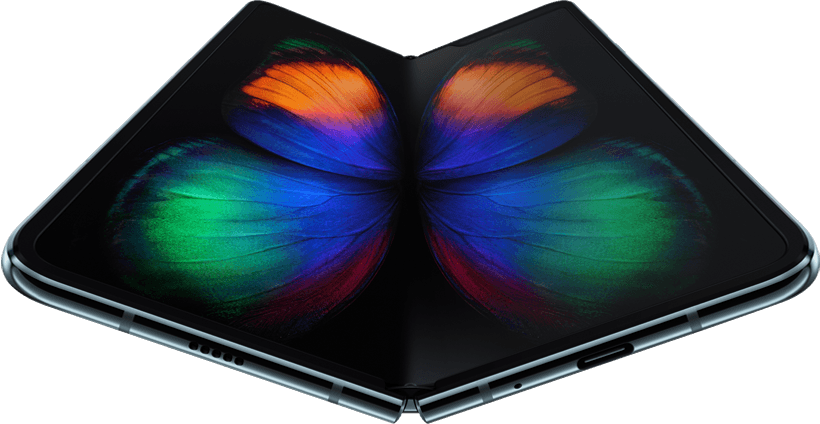 As per Samsung, it is the biggest breakthrough since the mobile phone was invented.

It is no doubt very handy to have a mobile which unfolds to become a tablet. So in those long commuting hours, you can simply unfold your phone, make it a tablet and enjoy the videos or movies. When you are on the move, simply fold it and put it easily in your pocket. Samsung fold also allows you to see your text messages while watching videos so that means you won’t miss any important messages when watching a video.

Samsung fold comes with 12GB of RAM for intensive multitasking. Higher RAM means higher temporary memory which means your mobile device won’t go slow when you have multiple apps open or during gaming and streaming. You can do multiple things at the same time. For storing media and apps, it has 512GB built-in storage which is more than enough to store thousands of videos, songs and apps.

The battery is usually believed to be a problem with such large display devices because large display means more battery consumption which means it will run out quicker than smaller display devices. Having said that, you also need to follow phone battery saving tips to make sure you are not burning it faster. Samsung fold, however, promises good battery life compared to other similar display devices. As per Samsung, the dual battery with 4380mAh dual, (typical) capacity is a game-changer that uses and recharges both cells to prevent overcharging. To save power, intelligent battery management puts apps you’re not using on reserve.

Samsung fold promises easily snapshot breathtaking landscapes or zoom in to get up close. You can snap between the 16MP Ultra Wide Camera or the 12MP Wide-angle and Telephoto Cameras to broaden or narrow your focus with a tap.

So far, the iPhone camera is believed to be the best in smartphones as per overall reviews on smartphone cameras. Also, when checking camera specs, remember the higher pixel doesn’t necessarily mean better performance or better picture quality. For instance, 8MP of iPhone can be better than 13MP of Android phones.

The overall Samsung fold reviews are good and the spec scores are also good, but they have been eclipsed by devices like the new iPhone 11 range, the OnePlus 7T, and the Asus ROG Phone 2. Nevertheless, the Galaxy Fold doesn’t disappoint. You’ll have no issues running the apps you want to use.

Support is our top priority. If you have any questions, don't hesitate to contact us.

With our Express Posting, all Items (dispatched from Brisbane, Australia) will arrive in 2-3 days.

Orders over $80 come with free shipping